Today, we finally landed in Mombasa! It was amazing to finally reach our destination after the last two days of nonstop travel. As we boarded the vans to drive to Rabai, it was so cool to see how close this year’s team has already gotten to each other, especially since some of them met for the first time at the airport. For roughly half of our team, this is our first trip to Kenya and it was great to watch everyone have so many new experiences in just the first day.

After settling in, we then had the opportunity to visit a kindergarten school that feeds into a secondary school that Koins built several years ago. We got such an amazing welcome as the women and children who lived in the village began to dance and sing to greet us. One by one we got out of the vans and joined them in dancing. They were so gracious in welcoming us to the village and there was so much joy on everyone’s faces. After seeing their classrooms, they had the children preform a program for us that consisted of singing and dancing, as well as reciting a poem and their school motto. It was so touching to see the hard work they put into their performances. After more dancing, we were able to distribute some supplies and it was great to see the team begin to hand out pencils with Dum Dum suckers that many of you made and donated.

We then went to paint a mural on the side of the Buni high school. From tracing the stencils with chalk, to mixing paint, to balancing on a ladder to paint the highest parts, everyone helped make this beautiful picture come to life. It was inspiring to see everyone work together to create this mural. While we painted, we turned on music and hung out with the kids. They beat us at volleyball, showed us their school, and had the most epic dance party in one of their classrooms. They taught us some dance moves, and in turn we showed them how to do the Macarena. Everyone took turns playing some of their favorite songs, holding hands and dancing around. It was so much fun to see everyone dancing and laughing together.

It was an awesome first day, and we are excited for all we hope to accomplish in the coming days. Thank you for all your support!

Today’s special shout out: Kyle!! Kyle is the ladder champion! He scaled a stick-and-twine ladder to fearlessly paint the upper sections of the mural. He also started several soccer games, and on one such occasion, drop-kicked a ball that hit Burt square in the neck, resulting in Burt falling to the ground, much to alarm and entertainment of the team. He worked hard on the mural and was great interacting with all the kids. But mostly is good with ladders. 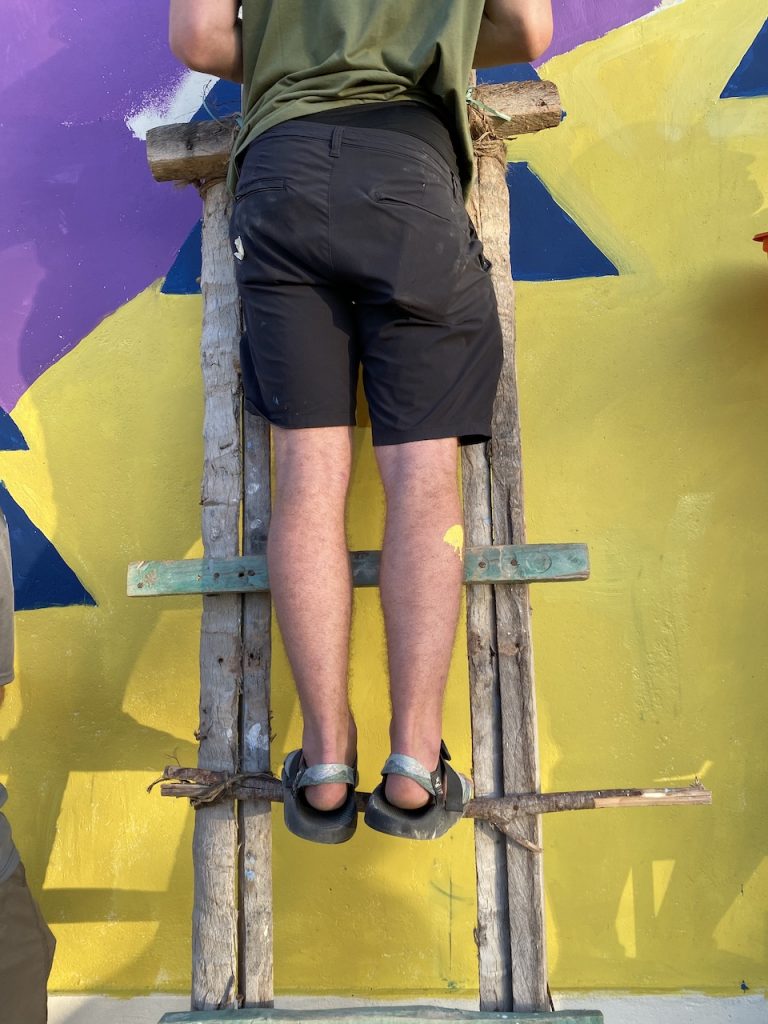