Our first stop for the day was at a medical clinic in Bwagamoyo to deliver blankets for the newborns and ibuprofen and other medical supplies for the patients. There were a lot of people lined up on the bench of the clinic waiting to be taken care of. We went into the office of the medical staff (three nurses) to learn about their three room clinic. They care for 20K residents of the local villages with the primary services being care for pneumonia and malaria. An interesting fact, the nurses deliver on average seven babies per week. The new mothers are allowed to rest for six hours after birth and then are asked to return to their homes (mud huts). The staff was thankful for the supplies and asked if we will come back to which we said we would like to. They then asked if we can come back next week.

We then headed to Kazameni to find Trevor, work on the mural and teach some classes. On the way we passed two schools with soccer fields. On one of the fields the kids were playing with a rolled up ball of rags. Jory grabbed one of the soccer balls and headed to the field, the excitement with the school kids was incredible.

We arrived on Kazameni but didn’t find Trevor waiting for us like we thought we would. Trevor was amongst the villagers filming but heard the kids start to sing and headed to see us being escorted to the school. We haven’t had much time to learn about Trevors’ experience so we’ll include updates on the next email.

TJ and Jory didn’t waste anytime getting started on painting the mural. The rest of us began teaching classes. In the village there are two classes taught in a mud hut and the others are taught under large cashew trees where their chairs are uneven rocks and their laps serve as their desks. Brandy commented that the kids in the outside classes were not bothered by the wind, dust or cattle and goats walking around but these items were definitely distracting to us Americans teaching.

Todd and Eric taught the second and third graders how to use yo-yo’s, play with juggling balls and to blow bubbles with bubble gum. Thanks to Dillon Anderson for donating the yo-yo’s and to the Kona Public Charter School in Hawaii for the juggling balls.

Glade, Katelyn and Seth taught the kindergarten age children an English song, the color pattern of a rainbow, played a matching picture memory game, did a small craft project and topped it off by painting their faces.

Brandy and Sarah taught the first graders about transportation, specifically how they got from America to the village of Kazameni. They also taught them about the animals of the world. 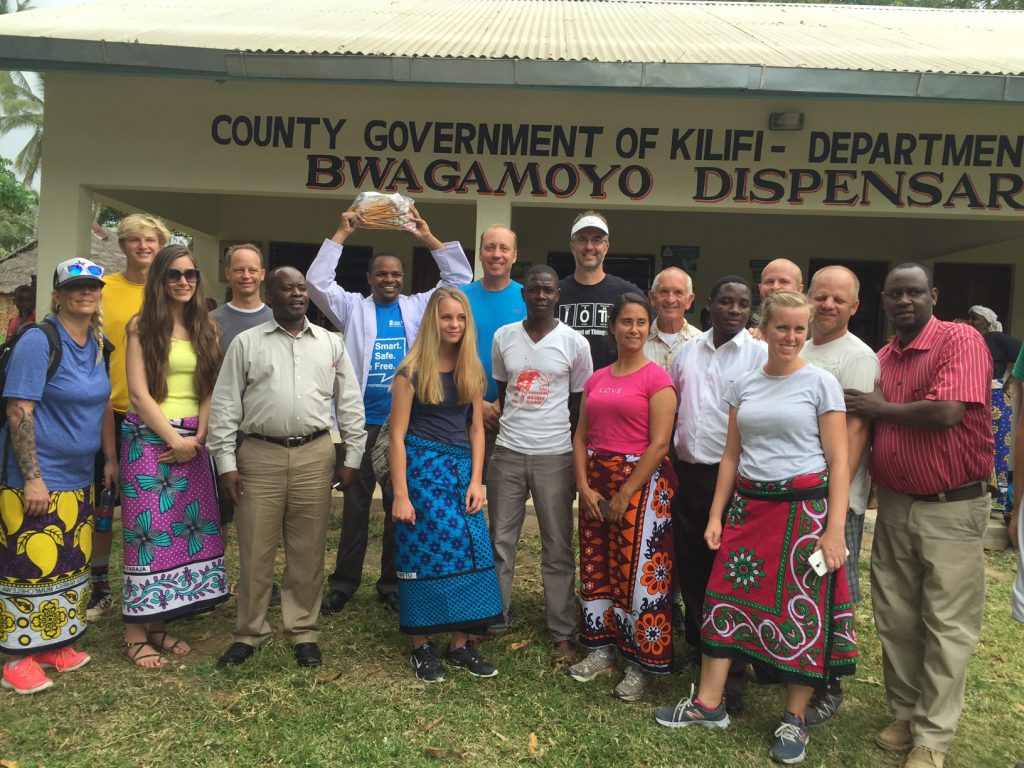 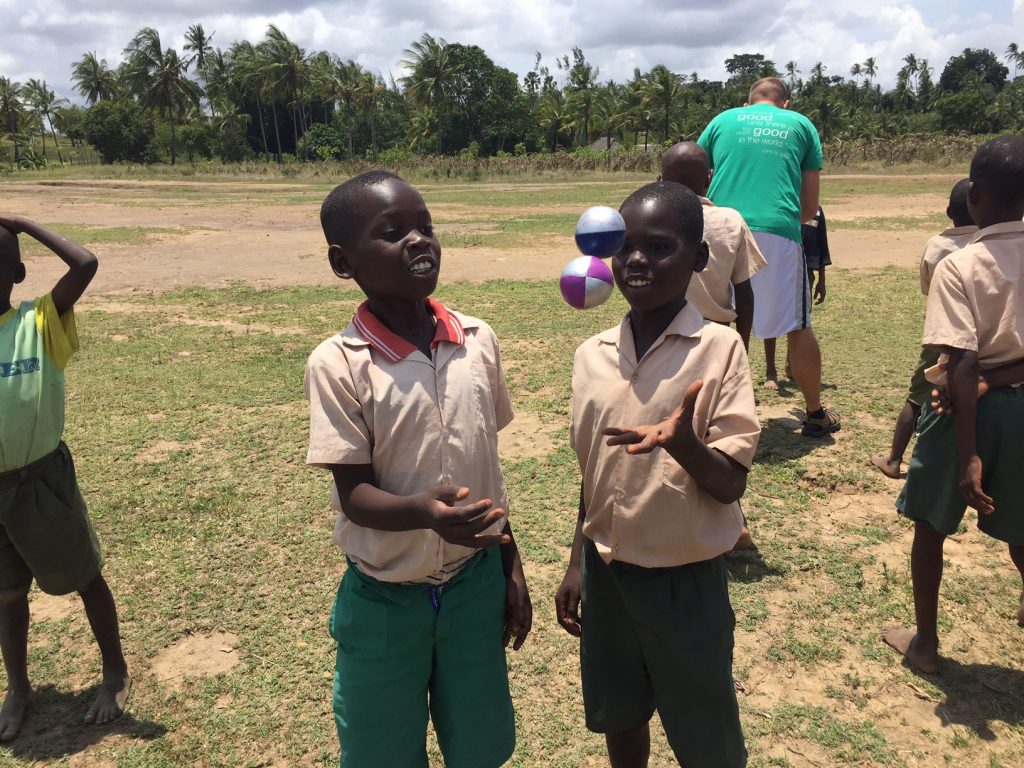 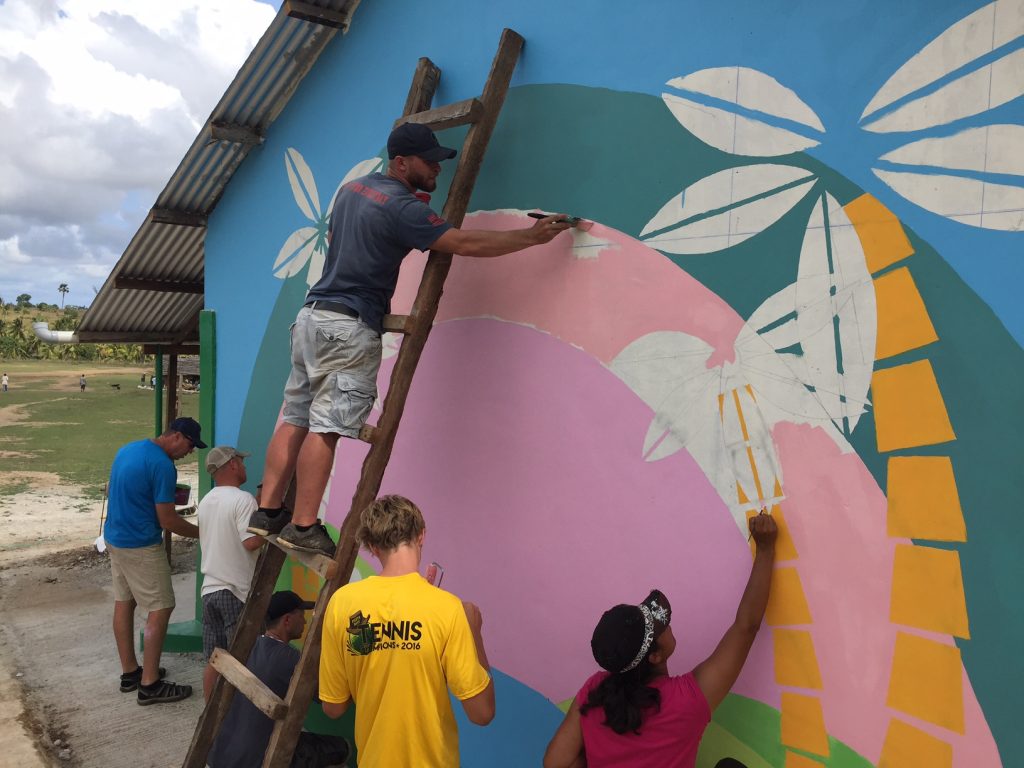 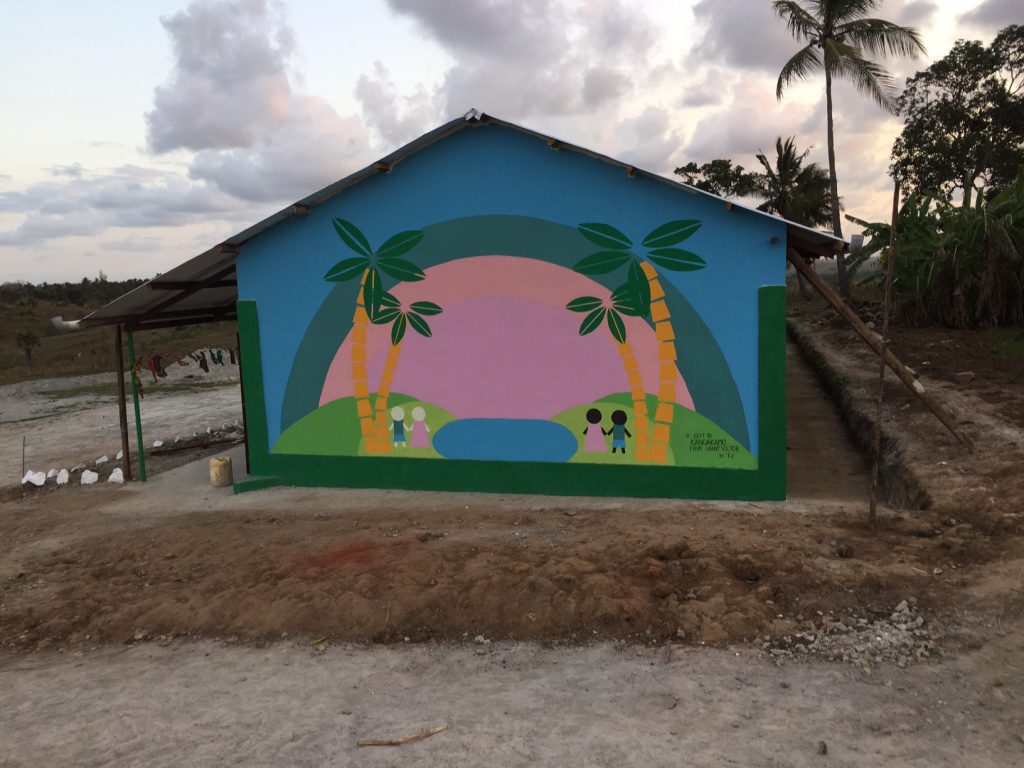 Kelly and Abby taught the pre-kindergarten children about animals using paper bag puppets. The kids were able to color the animals on the bag. Abby and Kelly were surprised to learn that these kids didn’t know what the animals on the bags were, which included a rhinoceros, a turtle, an owl, a frog or a fish. They did recognize the crab because only a few had been to the beach.

After teaching classes most went to help TJ and Jory on the mural while Todd, Eric and Kelly did a number of eye tests. All the kids passed the test with exception of two who were too shy to answer the eye test questions. The enlightening moment doing the eye tests was when the teachers came in and asked to be tested. At least three of them needed glasses for reading. A village elder also wanted to be tested. After fitting him for glasses he looked out of the classroom towards the mud hut classroom a few hundred yards away and was soooo surprised to see the people down there. He wore the glasses the rest of the day and talked to the team frequently about what he could now see.

TJ and Jory worked for more than eight hours non-stop on the mural. To give a little insight, the wall is in the direct sunlight and was radiating heat. The humidity made it feel even hotter. When asked about the experience, they each answered about how excruciating the heat was. The thing that kept TJ going was knowing that the villagers work all day long, non-stop, on their daily chores to survive. The team helped as much as possible and we are happy to report that it was finished and looks incredible thanks to a team of perfectionists.

Kelly, Abby and Sara took a break from painting to teach “Days for Girls” to the women of the village. Each woman received a feminine hygiene kit. When Kenyan women get excited they use a very distinct high pitch screech or yell (it’s hard to describe unless you’ve heard it). It’s safe to say the excitement was heard throughout the village. Prior to this, they didn’t have any products to care for themselves with. It was obvious basic hygiene was not part of their daily routine.

Brandy had the opportunity to sit with a few women villagers and put on fingernail and toe nail polish. She felt part of the group and was able to hold one of the children while the women put on the polish. She commented that these women are just like her girls in that they wanted to put on designs and multiple colors.

We are now back at the place we are staying preparing for tomorrow when we will deliver more supplies to a different clinic, teach classes to a different school and do the official handing over ceremony of the Kangakamo school.